- July 17, 2013
So I went into the Angeles National Forest this past weekend to explore some trails that I noticed on the side of the road the last time I was in the area. Coincidentally, two others guys were in the parking lot and planning to do a very similar ride. We headed down and then up a lesser traveled portion of the Silver Moccasin Trail (SMT). The trail was fun in some sections and absolutely brutal in others. With a mix of sharp switchbacks, steep sandy ascents, and super steep hike-a-bike ascents, it took us over an hour to cover 2.7 miles.

I was beat at the top of the climb. I walked over to a bush to take a nature break, and as I finished my business and walked away one of the other cyclists asked, "So, do you know about the Poodle Dog Bush?" "Uh, no," I responded. Sounded like a made up thing to me. What is this guy going to give me a lecture about the types of plants up here? He continued, "the plant you just visited is a Poodle Dog Bush. They can give people a pretty nasty rash, very similar to poison oak. Are you allergic to poison oak?" Dang, I remember seeing some signs about this the last time I was riding in the area, but I really didn't take notice. And yes, I am very, very allergic to poison oak. My body likes to freak out at the slightest contact. This was not a good start to the ride.

We continued riding for a few more hours, and I tried to dodge the Poodle Dog, which seemed to be everywhere now that he had pointed it put. The seeds sit dormant in the ground for years, and the massive Station Fire in 2009 was just the trigger that they were waiting for to burst back onto the scene. Most people have heard of poison oak, ivy, and sumac, but Poodle Dog is lesser known since it only pops up in certain conditions and altitude bands. It is also known as Turricula, but that is not nearly as fun to say.

I knew that I had already made contact with my legs and arms on the ride and during my break, so the odds of getting a rash were pretty good. To make things worse, the heat was oppressive that day, and I realized that every time I wiped my brow, touched my arms, or swatted a bug on my leg it was another potential spread of the problem. When I got back home I spent ages scrubbing with Tecnu and soap rinsed by cold water, hoping that there was some chance that I could still wash away the dastardly allergens. Getting the oils/irritants/compounds/whatever off your skin, and clothes, and other stuff is absolutely crucial to ensure that you don't keep re-exposing yourself and spreading the rash. I speak from experience having done this oh-so-wrong in the past.

But it was a lost cause. About 30 hours later I start to see the first real signs of the rash. Over the next two days. Itchy, bumpy, red-ish areas on my forearms, ankles, lower legs, the back of my keen, the crook of my elbow, the ridge of my ears, part of my forehead. I guess it was time for me to experience the Poodle Dog. At first I was really scared by the way people online had described the impact as worse than poison oak in all way: more intense, longer lasting, potential scarring. However, I am 3.5 days post exposure and so far it is pretty manageable. I take a Benadryl and apply some cortisone cream once or twice a day. The rash is way more moderate than my experiences with poison oak, where I sometimes would end up with white socks turning yellow as all the puss would continuously run down my afflicted legs (yeah, that's gross). I am just hoping this mild reaction holds steady without getting worse and then fades soon.

If you are reading this post, there's a good chance you were recently exposed and looked to see how others fared (or maybe you are just a dog enthusiast led astray, in which case I can't really help you). Just realize that everyone reacts differently. Some people can roll around in Poodle Dog or poison oak/ivy all day and never get a rash. Other just have to have a slight exposure and their throats start swelling up. So there's a chance you will get away easy, and I wish you the best. If it gets really bad, see a doctor. In the past they have hooked me up with heavy duty steroids that can battle the rash in a way that no topical ointment can (no word on how the steroids helped my cycling performance, I drink too much beer and eat too much to make for a proper lab rat).

As a side note, there were too many good options for the title of the post. Here are a few of the other candidates: 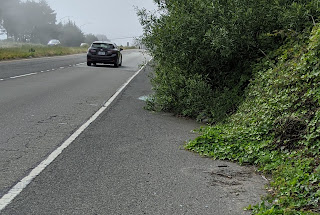