Showing posts from February, 2009
Show all

- February 22, 2009
For anyone seeking some vertical in the L.A. area, Steve Edwards has a great webpage with a database of climbs in the area. This weekend I tried out Piuma and Fernwood in the Santa Monica Mountains for the first time, it was a blast. BirthdayChallenge.com - Bike Climbing Database
Post a Comment
Read more

We had a chance to watch the last few miles of the Tour de California today. It was so much fun to see a real bike race in California. A breakaway group had a sizable lead on the peloton, and there were a number of stragglers behind the main group, so it made for a lot of action on the race course. Team Astana was leading the main pack on every lap, so we had great views of Lance Armstrong and the race leader, Levi Leipheimer. I took a few photos and posted some of the better ones on the web, feel free to take a look.
Post a Comment
Read more

You can help improve the roads 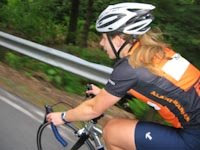 If you ride with any regularity in the Los Angeles area, or anywhere for that matter, you have had to deal with potholes and rough roads before. Not only are these obstacles annoying and uncomfortable, they can be downright dangerous. In fact, I have seen a fellow cyclists carted away in an ambulance after being swallowed by a huge pothole. Fortunately, there is something you can do about this problem: report it. In fact, most cities are required by law to repair potholes and severe cracks in the road once reported. The city or county can be held liable for damages when a bad road causes bodily injury of damage to a bike, especially if the dangerous spot in question has already been reported. So please, take advantage of the links below and report any dangers you have seen on the road. Your input will make the streets safer for everyone. When making a report make sure to emphasize that your safety and the safety of those around you is at risk because of this road danger. If you cann
Post a Comment
Read more

The pros are coming!

- February 19, 2009
This Saturday, February 21, the Amgen Tour de California will be visiting the Los Angeles area. This is our annual opportunity to catch a glimpse of world class cyclists in our hometown! Stage 7 will start at noon in Santa Clarita and take the riders 89 strenuous miles up and over Millcreek Summit in the San Gabriel Mountains to a likely sprint finish at the Rose Bowl. The riders will be doing five laps through Pasadena, giving spectators a better chance of seeing their favorite riders. I plan to go watch the stage finish, and will hopefully have a few decent photos to share. Please see the race's official website for additional information: Amgen Tour de California, Stage 7 .
Post a Comment
Read more

- February 18, 2009
The following email has been swirling through many cycling and triathlon email list in the Los Angeles area. This incident occurred on Pacific Coast Highway near Malibu this past Saturday, February 14: This past Saturday, my wife, a few friends, and I set out to do a 45 mile ride in Malibu along PCH. Around mile 35, just after we turned around at Las Posas, I felt a sharp pain in my left side. First, I thought it was a rock kicked up by one of the cars. But then I noticed the passenger of a passing pick-up truck was yelling and waving what looked to be a pistol, while he laughed and taunted us. Then I realized that I had been shot with something from that gun. I turned around and looked at my friend behind me and immediately realized he had been shot as well. We stopped to make sure we weren't losing blood and everything was alright. Thankfully, we just had a few large welts on our behind from what must have been a BB or pellet gun. And even more thankful that we didn't panic
Post a Comment
Read more