Showing posts from November, 2018
Show all

After the big smoke out, a bunch of rain, and Thanksgiving, I am finally back to the normal bike commute. I gotta say, it's nice to be back at it. I bet no one has every said that about a car commute! As I was heading down San Francisco's Embarcadero I was greeted by a lovely, green site: a much improved bike lane. The stretch of road was previously consisted of a rough, small bike lane next to a mix of parked cars and/or speeding commuters depending on the time of day. Now the car traffic is kept to two lanes and there is a much safer berth for bikes. This is great news since 1) this stretch could be sketchy and 2) this is a heavy through are for bikes. Good job, San Francisco! Keep it up.
Post a Comment
Read more

Crash on the commute 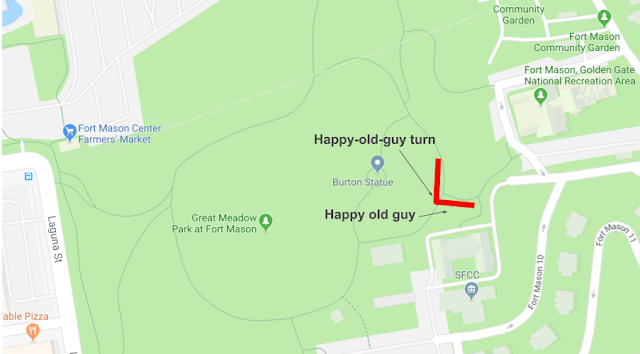 This was a couple months back, but sharing so you can learn from my mistakes. Unless you are racing in precarious conditions, crashing on your road bike should be any extremely rare occasion. And it's a rude awakening when it happens! I was riding my normal commute route, chatting it up with a friendly guy on a mountain bike. About 2/3 of the way into the ride I approached a sharp intersection turn on a narrow path. It's a relatively famous turn among Marin-to-SF bike commuters -- informally known as happy-old-guy-turn. There's a gentleman out doing his exercises every morning, and he stops to wave and greet each passing cyclist with a melodic "Gooood morning! Have a nice day!" He's the best ... but back to the story. I've ridden through the spot 100+ times before, and I didn't think twice. Within a split second I was down, sliding across the pavement.  Source: Google Maps ( location link ) So what happened? I could jump to lots of contribu
Post a Comment
Read more 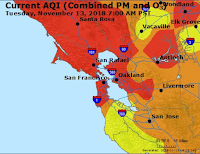 Source: AIRNow.gov Die hard bike commuters can justify riding in most conditions. Too cold? Bust out the balaclava and toe warmers. Too hot? Leave earlier in the morning to beat the heat. Rainy? Buy some good rain pants and a jacket. Windy? Put your head down and grind it out. Tornadoes? Ok, there's a limit to this... This is especially true in the San Francisco Bay Area given our normally mild weather. But what about when the air goes bad? By "bad" I mean air pollution rising to the unhealthy levels for days on end. Currently we are faced with that exact situation. A devastating wildfire in Butte county to our northwest has sent a blanket of smoke particles our way, elevating PM2.5 (nasty small particle pollution that can get into your bloodstream) to levels we rarely see. The air is thick, hazy, exceedingly dry and casting a post-apocalyptic pall over the whole region. Source: AIRNow.gov What is a cyclist to do? We are a susceptible group:
Post a Comment
Read more 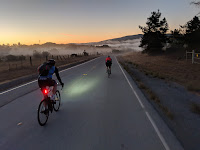 Riding under stunning skies at sunrise or sunset is inspiring and makes for great photos. If you are riding at this time, odds are part of your ride also happens during the time when the sun is low on the horizon. There is an insidious scenario that can turn certain parts of your route into a danger zone. Here's the recipe for danger: Riding on a road shared with cars, especially when there's no/minimal shoulder space Sun low on the horizon (and the horizon itself is low, minimal terrain above the drivers line of sight) Clear day. No clouds to block the direct sunlight  Road lined up with sun such that it's in your eyes (and even worse, in the eyes of drivers behind you) Combine these elements and your normal commute road becomes much riskier. The blinding sun is probably an annoyance to you personally, but the real problem is behind you. The automobile drivers, who are likely ~90% less "inspired" and attentive than you on the bike, are going to have a
Post a Comment
Read more
More posts